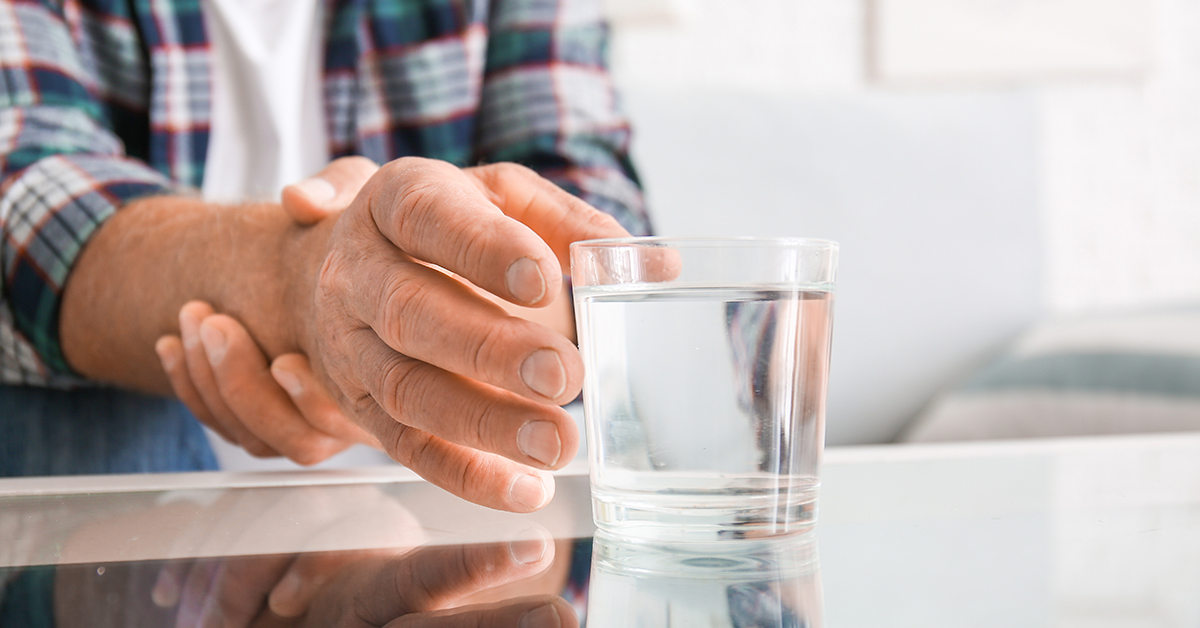 Tim Johnson had struggled with back issues and cardiac concerns for many years when the shakes started. The tremors gradually worsened, and his primary care physician suspected the then-50-something-year-old had Parkinson’s disease (PD). With medication, Tim’s shakes improved but didn’t stop. When he went to a neurologist for more help, they confirmed Tim’s PD diagnosis.

According to the National Institute on Aging, “Parkinson’s disease is a brain disorder that causes unintended or uncontrollable movements, such as shaking, stiffness, and difficulty with balance and coordination. Symptoms usually begin gradually and worsen over time. As the disease progresses, people may have difficulty walking and talking. They may also have mental and behavioral changes, sleep problems, depression, memory difficulties, and fatigue.”

More than one million people in the United States are living with PD, more than the combined number of people diagnosed with multiple sclerosis, muscular dystrophy, and Lou Gehrig’s disease (or Amyotrophic Lateral Sclerosis). Approximately 60,000 Americans are diagnosed with PD each year.

When Tim developed swallowing issues associated with PD, he turned to Welia Health speech-language pathologist Amy Miller MA, CCC-SLP, for support. In the process, Amy suggested he try a program called LSVT LOUD®, which trains people with PD to use their voice at a normal loudness level while speaking.

“People with Parkinson’s disease often lose their ability to gauge how loudly they’re communicating,” said Amy. “They think they’re speaking at a normal volume, but they’re really speaking quietly, which can be frustrating for the patient and their loved ones. The program is called the ‘Lee Silverman Voice Treatment’ in honor of Mrs. Lee Silverman, a PD patient whose husband struggled with losing her ability to communicate and challenged researchers to create a speech-specific program.”

The LSVT LOUD treatment program was developed in 1985 and was designed to help people “recalibrate” their perceptions. Hence, they know how loud or soft they sound to other people and can feel comfortable using a stronger voice at a normal loudness level. The regimen is really intense, according to Amy — and Tim. Patients meet for an hour four times per week for four weeks. Amy says that intense repetition helps patients see success, specifically with intonation; vocal loudness; overall articulation; and facial expressions, which are key to how we communicate. Stiffness in the facial muscles can leave PD patients with a flat affect, referred to as facial masking.

LSVT BIG trains people with PD to use their bodies more as they did before being diagnosed. As the disease progresses, patients often move with gestures or actions that become smaller and slower. Some PD patients might have trouble walking, getting dressed, or doing other activities of daily living. Physical therapists like Andrew customize the patient’s specific needs and goals to improve function and potentially slow down further symptom progression.

“PD patients usually take shuffle steps and think they’re taking normal steps,” said Andrew. “So through the program, we help patients figure out how much force they need to put out to achieve the motion or calibration, which differs for each patient. We can make moving possible again.”

Andrew sees patients achieve what he calls “a-ha” moments in the program. For example, a patient might struggle to button a button, sometimes taking 30 seconds on a single button. Then, after two to three weeks of LSVT BIG, they can button their shirt on the first attempt, which may only take two seconds. For others, the moment might be when patients have to consistently push their hands on the chair’s armrest to get up, and then they can just stand-up out without using their arms.

According to Andrew, patients need to produce these movements consistently on a day-to-day basis to achieve full calibration. So similar to LSVT LOUD, LSVT BIG is an intense 16-session program with 60-minute sessions, four times per week. Patients can choose to participate in one program and then the other the next month or complete two hours in back-to-back sessions.

A “tough” but worthwhile rehabilitation program

Tim admits that before starting the LSVT BIG and LOUD program, he was in “lousy shape,” often losing his balance and having a hard time walking. Topping it off, he had experienced a heart attack, requiring him to have stents put in and complete 36 sessions of cardiac rehab. So he went from one rehabilitative program to the next. He says the running back and forth for therapy for such a stretch of time was a lot for his wife, Becky — “that and being married to me for 53 years.”

Tim thinks the program was “pretty tough” but absolutely worth the effort.

“There’s a lot to it, and it’s rigorous for an old guy like me,” says Tim. “You do everything just like it says: big. The therapists train you to make yourself do certain things with an exaggerated movement, so when I go on a walk, I try to make my steps bigger, which also helps me to be more stable. Balance is a big issue for people with Parkinson’s.”

Tim is grateful he can continue going on near-daily walks with Becky and that he hasn’t fallen in a while. But he says so many things are just really hard.

“I have days when it’s hard to get out of bed or get around or go up the stairs,” says Tim. “But I know that if I didn’t go through the program, I would have fewer good days. I recommend the program to anyone, even if you don’t get as much of the physical results, because it gets you moving.”

Tim grew up just north of Ogilvie with a large extended family nearby. His aunt and uncle lived down the street with their nine kids, so he always had plenty of playmates. Tim spent 70 years of his life right in the community. “There’s not many of us left,” he says. “We’re part of the old generation.”

Tim says some of his relatives, cousins his age, have since been diagnosed with PD. They all lived on the same street and used to run through the fog behind the trucks spraying for mosquitos. Researchers have been studying the hereditary aspects of the disease —and the potential effects of glyphosate, a chemical in herbicides like Roundup. Tim says they used “all the bad chemicals in the 1950s.”

Today, Tim lives in Maple Grove with his son and daughter-in-law, who is a nurse and is key to encouraging Tim and Becky to walk every day. The busy suburban roads were a “rude awakening,” but Tim is enjoying his new life. His grandson took over their former place in Ogilvie, working on old cars just like Tim used to do. Though Tim knows his house is in good hands, it was still hard to leave: he and his wife had lived there for 32 years.

He also misses the care team at Welia Health. He had to find new providers because of the distance from Maple Grove to Mora.

“I spent so much time at the facility in Mora, I was ready to get a paycheck,” jokes Tim. “There are super people there. They all knew me by my first name.”

Welia Health offers a Parkinson’s Support Group led by a team of physical, occupational and speech therapists. The group provides education, support and encouragement and is free of charge. Everyone is welcome to attend.

To learn about PD, LSVT Big and LSVT Loud or the Parkinson’s Support Group, call Rehabilitation Services at 320.225.3356.

COVID-19 resources when you need them.