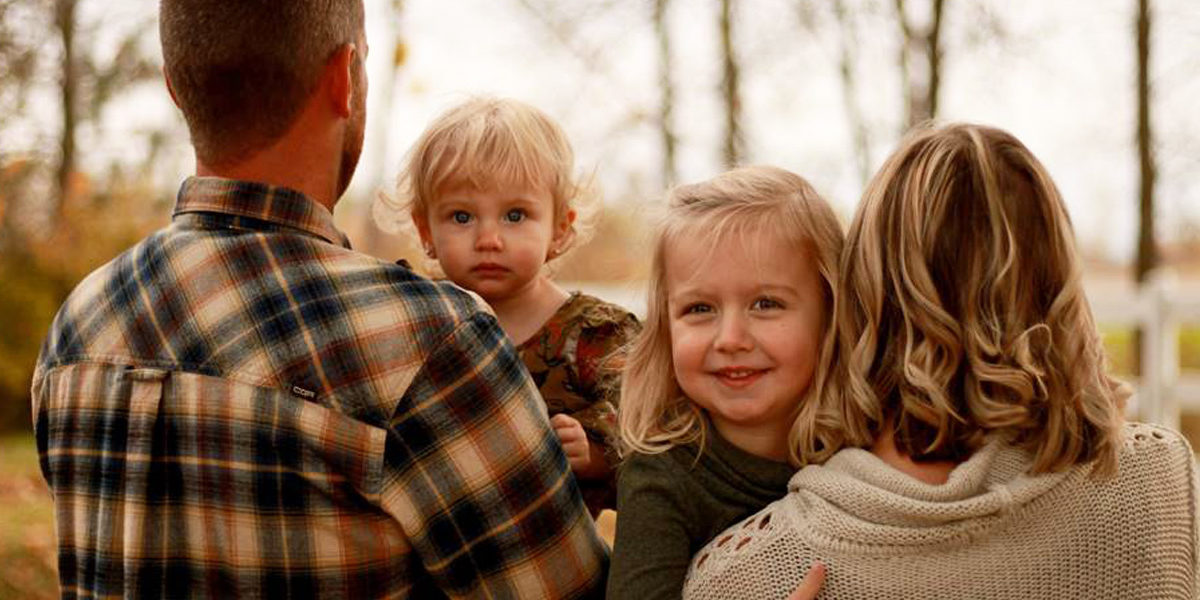 From the start, Amy Miller knew something wasn’t right with her newborn daughter. Although Amy is a certified speech pathologist at Welia Health, she gave birth to her two daughters at another healthcare facility, one that had cared for her throughout her life. Yet, it was one of her close colleagues, Dr. Donner, who saved her younger daughter’s life—by chance.

Amy’s daughter, Maeva, was born in July 2018. Hours after she was born, Maeva started experiencing reflux so badly it was coming out of her nose. The nurses advised Amy to just “put her on her side,” as she most likely had swallowed some fluids during birth.

Amy dutifully followed their instructions. But as the postpartum days passed, Maeva got progressively worse. She had significant stridor, a high-pitched wheezing sound caused by airflow being disrupted. Amy remembers watching Maeva’s chest retract as she struggled to breathe; when she would eat, Maeva would have blue spells and aspirate. Maeva struggled so much to eat and breathe that she would pass out and wake up 10 minutes later screaming.

Amy, feeling terrified for her baby’s life, brought Maeva back to the birthing facility. There, Amy consulted with the baby’s doctor, listing all of the symptoms she and her husband were witnessing. At the end of the appointment, the doctor flagged only that Maeva wasn’t gaining weight. Again, Amy was told that Maeva was okay–that she just had small facial features and that her lungs were clear.

Fast forward five weeks, when Amy brought Maeva in a second time, and the providers made notice that Maeva had only gained three ounces. Typically, babies gain one-to-two pounds in the first five weeks.

On August 16, 2018, Amy brought her three-year old daughter, Harper, in for a pre-op appointment with Dr. Donner, a Welia Health family medicine physician. Harper was getting tubes in her ears. “I remember debating bringing Maeva at all, because of her issues,” recalled Amy. “She screamed a lot, and her breathing was so loud that people would turn and stare at us, often commenting.”

Amy never had an answer for them because she was told multiple times by the birthing facility, “This is normal.”

After Dr. Donner completed his exam with Harper, he turned to Amy as Maeva was experiencing her usual stridor. “Does she always sound like that?” he inquired.

Feeling shocked and then relieved, Amy realized that someone in the medical field had finally acknowledged her stridor. “Immediately, a flood of information and emotion came out,” said Amy. “I told Dr. Donner everything—symptoms, appointments, her lack of eating, her poor weight gain. Everything.”

The Welia Health doctor of 33 years took Maeva out of her car seat and he listened carefully. He maneuvered Maeva in different positions and he listened again. He listened to her lungs and stridor. After placing Maeva back in her car seat, Dr. Donner said, “I think she has laryngomalacia or tracheomalacia.”

Amy said that she was quite certain at that point that she looked like a deer in the headlights. When Dr. Donner showed her a video, she kept thinking: “That’s my kid, that’s exactly what my child sounds like.” Dr. Donner printed information about laryngomalacia and trachealmalacia and told Miller to get an ears, nose and throat (ENT) referral right away.

Within a week, Miller was back in Maeva’s primary office requesting an ENT referral. On August 26, Maeva had an appointment with an ENT in the Twin Cities.

“Within three minutes of having a scope completed on her, Maeva was diagnosed with severe laryngomalacia and failure to thrive,” said Amy. “We were told that if she didn’t have surgery, she would be unable to attend daycare—a simple cold would mean her being admitted into the hospital within hours.”

Due to the severity of her condition, Maeva was scheduled for a supraglottoplasty, a microscopic surgical procedure, at Children’s Hospital just three days later. At just six weeks old, Maeva was to have surgery on her larynx, arytenoids and epiglottis.

Following the procedure, the surgeon said Maeva had a Level 4 laryngomalacia, the most severe form. The infant’s airway was only three mm wide prior to surgery—about three pencil dots wide.

“Everything went well,” said Amy. “Recovery was rough to say the least, but we were able to go home less than 48 hours after the airway surgery. And when we did, we had a completely different baby on our hands—one who smiled, ate and rarely cried.”

For many babies who receive the laryngomalacia diagnosis, it’s simply noisy breathing. Then, there’s a small group of babies who are diagnosed with life-threatening laryngomalacia, like Maeva.

“Our life was completely turned upside down all because of an airway disorder that was supposed to be common, normal, no big deal,” said Amy. “Today, Maeva is a pint-sized powerhouse who is healthy and happy. She still has laryngomalacia, but just a mild form. Dr. Donner truly saved her. I don’t know where we would be without his knowledge, patience and support. I am forever grateful.”

We're in this together

When you need care, any care, Welia Health is here for you and your family.

Your safety is our top priority. With rigorous, enhanced precautions, and the introduction of virtual care, you can count on us for all the care you need.

Learn more about how we’re keeping you safe.

Information on the novel Coronavirus (COVID-19)

At Welia Health, keeping you, our patients, and our communities safe is our top priority. For the facts on the novel coronavirus (COVID-19), information on prevention and what to do if you are feeling sick, learn more on our COVID-19 information page.

Information on the novel Coronavirus (COVID-19)